My very first attempt at FMQ

So, when I was in Sweden I of course had to test out my new machine to make sure it worked and also to get a basic idea of how the machine worked from Mia whom I bought it off. Mia know exactly what I wanted to try first and set up the machine for free motion quilting, gave me a quick start off and then I got to play... And it was EVERYTHING I DREAMED!

It was:
* Exactly as difficult as I'd feared
* Exactly as fascinating as I thought it would be to "paint with a needle"
* Exactly as addictive and fun as I'd hoped!

So without further ado, here's my very first FMQ attempt =) 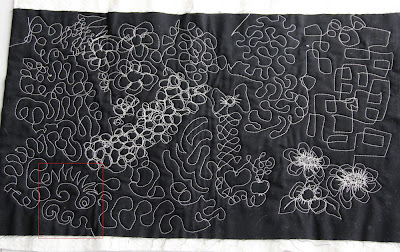 The little red square in the picture is what my teacher made to start me off, so that part isn't mine.

And I also thought I'd show you a group shot of some of the stuff I bought in Sweden. There's a lot of interesting stuff in there from new rulers, basting spray, markers, scissors of various kinds etc. I'll get back to this stuff as I get to try it and see how it works for me =) 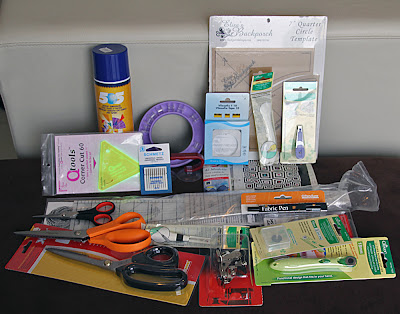