The cake is a lie

So I've finally finished the Companion Cube quilt top for Andreas gaming blanket! 600 separately peiced 3" squares later, it's finally done and already basted (please thank your favorite deity for 505 basting spray for me ^^) and by the machine for quilting. It's being quilted using a square loop the loop design which I'll take pictures of the process for tomorrow as it's to dark now =)

Portal 2 (the sequel to the game the Companion Cube is from) is released on the 20ieth of April so the quilt has to be done by then by the latest so he can play it with his quilt around him. I've been working on the back, it's basically just all Kona white but I decided to add a little fun touch: 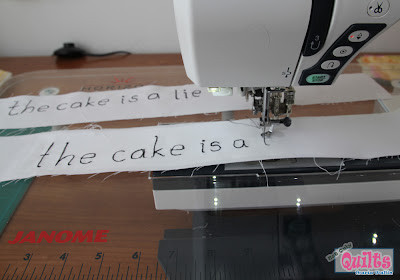 Those of you who've played the game will know exactly what this is. For the rest of you, this phrase is scribbled on stuff all over the Enrichment Center for Aperture Laboratories, which is where the game takes place. To ensure I got a real feeling handwriting style for the text I simply freehand quilted the text with black thread. It's a little tilted and wonky, just like it looks in the game: