Look what an adorable little thing kept us up all night!

Two days ago our friends found a little kitten we'd been planning on rescuing since before Christmas but didn't manage, it was so weak and skinny and dirty then that we thought it had passed away but luckily that wasn't the case! Two days ago our friends called and said they'd found and caught it in the engine of their car! Could have ended very badly this story if they hadn't seen him run in there.

Anyhow, this is Pjutin (not 100% that will be the final name though), will call him a "he" even though I don't know the sex for sure yet though as I haven't wanted to scare the daylights out of him by handling him yet. He's roughly 14-15 weeks based on the look of his healthier litter mates, haven't checked his teeth yet either for the same reason. For a street cat who's lived outside all his life and was just brought in  he's very calm and does let me pat and stroke him a little and when we leave the room he cries for us poor baby. Though if we move to quickly or make too much noise he will hiss a little. He lives in the bathroom for now, until we've taken care of all his infestations from fleas and mange to worms. He'll move to his new permanent home once all his treatments are done and he's a bit more relaxed with people as his new owner hasn't had cats for a few years. 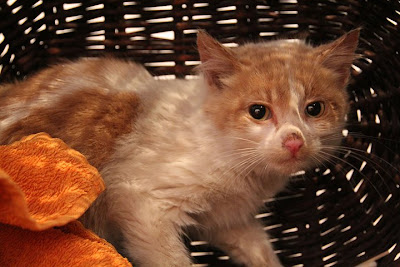 I've worked  at a cat sanctuary for many years in Sweden (and a dog sanctuary here in Malta) so I'm very used to taking care of these little unfortunates luckily. We'll see if we can get the vet to come home to us on Monday to give him a checkup and let us know what we should treat first and give us prescriptions and meds. Didn't want to start out with that and risk the little thing having a heart attack.
Posted by Maria Wallin at 09:28