There's one, ONE person on the island that repairs sewing machines, and when we finally got there when he felt like being in the store (took 3 tries) he told me he couldn't fix anything electrical should that be the problem and that "I was lucky to have such an amazing quality machine". No offense little Emerald but you and I both know you really aren't THAT high quality even though I love you.

I tell him I at least want an approx price or I can't really leave the machine with him and he finally says that it'll cost about €40. "About €40", no telling for sure. I sighed and told him I can't pay much more then that as it would be more economical for me to buy a new machine if it gets more expensive, the guy just shrugs and walks away! Customer service, not his strong suit that's for sure...

He also said it'd be done in the beginning of next week, hopefully, no promises there either. So I'm more then a little upset at this point as I'll be without a sewing machine for so long, and not knowing if it will be repaired or not. :( All in all, I've not been a very happy quilter lately.

Since I don't have anything else fun to share with you today I thought I could show you my trusty quilting helpers, Edward and Diana, here at work with my Crazy Rainforest quilt:


Edward says he knows he's not allowed on this particular table, but what if he only walks on the very edge? 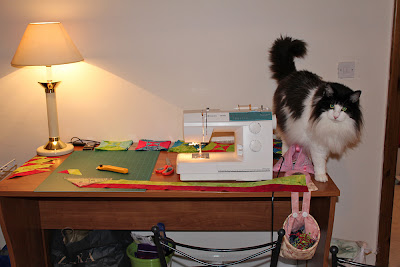 Diana is very happy with the layout and has decided to lie on it so I can't change it around again. =) 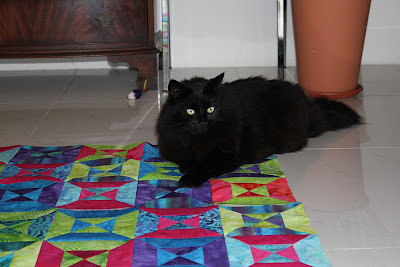