For the first time ever I tried out my silver colored lambskin. I've seen others use it online and it always looks so pretty but I haven't really been able to make myself use it until now as silver on silver always looks so boring in person to me. But after this first attempt I'm a lot more confident, it actually looks quite good! I have no idea what the braid is called, it's just something I played up while trying to learn a completely different braid *lol* If it has an official name and you know it, I'd be really happy if anyone enlightened me =) 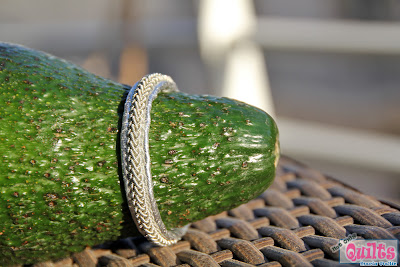 Again, the skinn of the bracelet looks a little bumpy because it's never been worn, it'll get all nice and even with use =) I have to show you later how great the silver bracelet looks when mixed with others. You see, I nearly never wear just one bracelet, I almost always wear at least 3 or more on the same arm, looks great I think!
Posted by Maria Wallin at 11:32