I've been playing around a little with my fairy fabric that I bought when I was in Sweden. I want to make a shadow quilt, inspired by one my mother had started on when I was there. It was just to adorable pass up on making one of my own when I found the fabric in a friends quilt store! Right now I'm trying to decide weather or not to keep a little pink around the edges of the fairy panels or not?

I'm having trouble deciding but it's leaning towards bringing out the seam ripper and removing the thin pink border... What do you think? I'm thinking the shadow effect will look nicer without it? 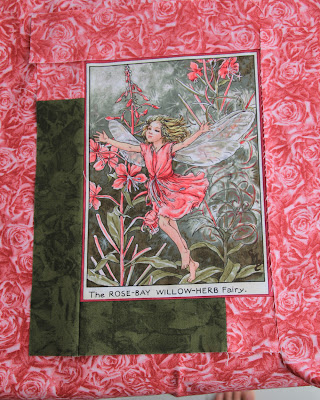 I think I'll leave the decision for now and ponder it for a bit as it's much to late to make any major decisions and after hearing the thunder and seeing the huge lightning storm that's brewing over the Mediterranean as I write - I think it's time to pull the plug on my beloved machine to protect it, go to bed under one of my beloved quilts, turn on a good movie and try to fall asleep despite my major fear of lightning storms.

While on the topic of my machine, it seems to have sort of "self healed" for most part, it still makes some bad noises from time to time but in between those sessions it works perfectly. Very weird but makes me a very happy camper! Now I just hope it will hang in there until the Janome guy can give it some much needed TLC this summer ^^
Posted by Maria Wallin at 02:04