So I've had this half finished little top lying around with the cubes pinned in place since last summer... 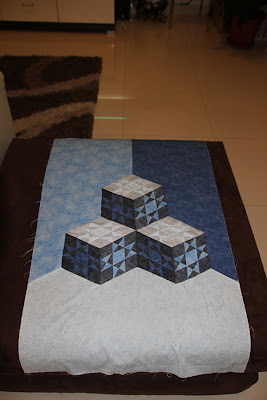 However, while I loved it then, upon closer inspection later it doesn't really hold up to my current standards and I've not felt like finishing it. Both because I loved it so much and was so proud of it when I was making it and today it makes me feel like crying a little - but also because I know no matter what I do I will only see it's flaws. It's more then a little bumpy (hoping to be able to quilt out some...) and the blocks are not the same size, but tonight I figured I should at lest applique the block in place as I'd noticed that the pins had rusted into the fabric (the reason I ordered the Tack tool - Malta's humidity is death to pins) and it would be completely ruined if left to it's own devices much longer.

It is still the most advanced thing I've ever made, all those Y seams nearly killed me and I ripped every seam at least 2 times I think. =)

I'll put it a way a little again now to see if I can get back enough love for it to quilt it and finish it.
Posted by Maria Wallin at 18:31