A gift for a friend - Ruffled Bracelet

I made one of my best friends a sami bracelet for her 25th birthday. She's a beautiful woman with a great sense of style (something I very much lack!) so I was terrified at the thought of getting her a gift. But after seeing a sami bracelet in a picture online I knew that was what similar to what I was going to make for my friend, it was very much her style I thought. 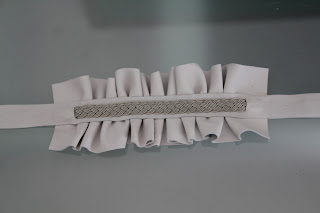 I auditioned leather colors and braids endlessly and after much internal debate I concluded that offwhite reindeer leather was the best choice in combination with a four strand braid with 3 strands of pewter threads. The ruffles was a battle and took many many tries but made the whole thing oh so feminine but still it felt very much like her with the skin and the pewter and the fact that you tie it instead of button it closed. She's from the north of Sweden and always working out - so she's no delicate flower and needs a little edge too ^^

I think she really liked it and it was given to her with the little pleated purse I made earlier. 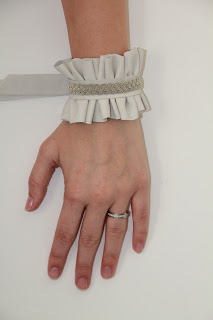