5 years ago, I was more nervous than I'd ever been in my life I think. I launched my baby, my brand new little company that was all ME - Pink Pony Design! In five years it has slowly grown, 23 patterns have seen the light of day in this time, and I'm so proud of each one. I have so many more in my head and in my sketch pad - just waiting to be born! 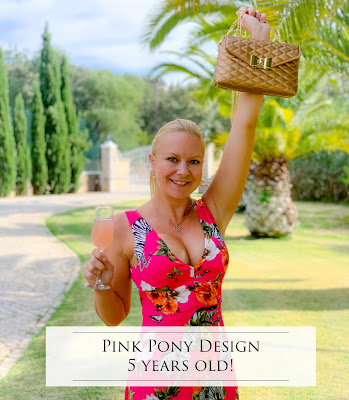 We will celebrate this with 20% discount on all patterns for the next 36 hours!

The past 5 years have been some of the best of my life and it's all thanks to YOU!  So from the bottom of my heart, thank you for purchasing my patterns, for attending classes, liking my posts, sharing your works on social media, reading my blog, participating in my Facebook group, watching my YouTube videos and for every little thing You do to show your support! I love you for it!

Can't wait to see what the next five years hold in store for my little company!

I was very happy when the Swedish newspaper Dala Demokraten asked me if I wanted to do an interview the other day! So much fun and it ended up being such a sweet article! 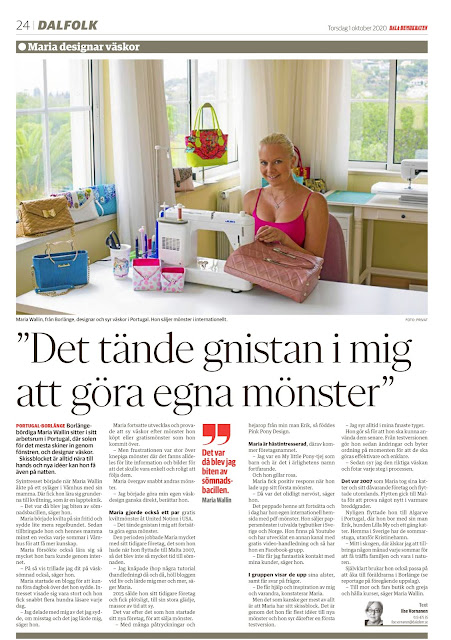 For those of you who doesn't read swedish, I'll translate each section below. 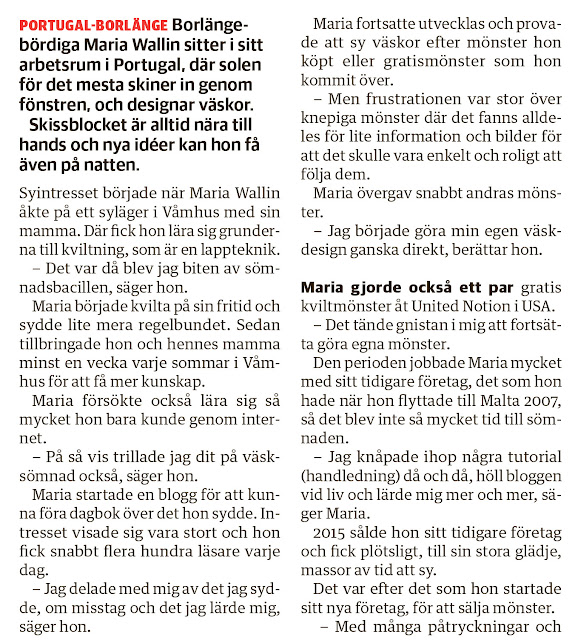 Maria Wallin, originally from Borlänge (small town in Sweden) sits in her sewing room in Portugal, where the sun almost always shines in through the windows. The sketch book is always close by and new ideas come to her, even at night.
Maria Wallins interest in sewing was born when she went on a quilting camp in Våmhus (small village in Sweden) with her mother. There she learned the basics of quilting, which is patchwork. - That's where I got infected with the quiltingbug, she says. Maria started quilting and also sewing in her spare time. After that she and her mother spent a week each summer in Våmhus to learn even more. Maria also tried to learn as much as she could from the internet. - That's how I got starting with bag making too, she says. Maria started a blog to be able to keep diary over what she made. The interest turned out to be bigger than she thought and she soon had several hundred readers each day. - I was just sharing what I was sewing, mistakes I made and what it taught me, she says.
Maria continued to learn and tried making bags from patterns she bought and found for free. - But the frustration was big over unnecessarily tricky patterns with way too little information and illustrations for them to be fun and easy to follow. Maria quickly abandoned following other people's patterns. - I started designing my own bags almost right away, she says.
Maria also made a couple of free quilt patterns for United Notions in the US. - That lit the spark in me to continue making my own patterns. During that period Maria worked a lot with the company she had when she moved to Malta back in 2007, so there wasn't much time for sewing. - I made a few tutorials from time to time and kept the blog alive and kept learning through says Maria. 2015 she sold her previous company and she suddenly, to her great joy had a lot of time to sew. It was after that she started her new company, to sell sewing patterns. - After a lot of encouragement and.... 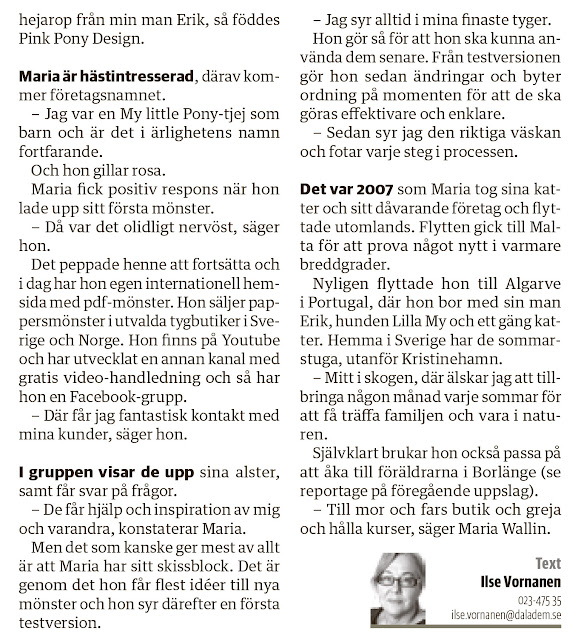 cheers from my man Erik,  Pink Pony Design was born.
Maria is a horseback rider, hence the name. - I was a My Little Pony girl growing up, and truth be told, I still am. And she loves pink.
Marig got a lot of positive feedback when she released her first pattern (my own note, the Bring the Basics Bag). - But it was insanely nerve wrecking, she says. It however spurred her to continue and today she has an international webpage where she sells PDF patterns. She also sells paper patterns in select quilting and fabric stores in Sweden and Norway.  She has developed a youtube channel where she offers free tips and tricks and she also has a Facebook group. - There I get a lovely contact with my customers, she says.
In the group they show off their works and help each other with questions.  But what might be most important is Marias sketchbook. That's how she gets most idéas for new designs and after sketching she sews a test version. - I always sew using my favourite fabrics. That's so she'll be able to use them later (my own comment: I sew even test versions in pretty fabrics, so I can use the test bags myself, as many of my finished "perfect" bags ends up as example bags in stores). From the test version she then makes any necessary changes and refines the making of the bag to make it easier and more convenient. - I then sew the final bag and take photographs of every step in the process.
It was 2007 Maria took her cats and current company and moved abroad. The move took her to Malta to try something new in a warmer setting. She recently moved to Algarve in Portugal where she lives with her man Erik, the dog Lilla My and a bunch of cats. Back in Sweden they have a summer home outside Kristinehamn. - In the middle of the woods, where I love to spend a month or two each summer to be in the nature. Naturally she also visits her parents in Borlänge (see previous article). - To mom and dad's store to fiddle about and hold classes, says Maria. 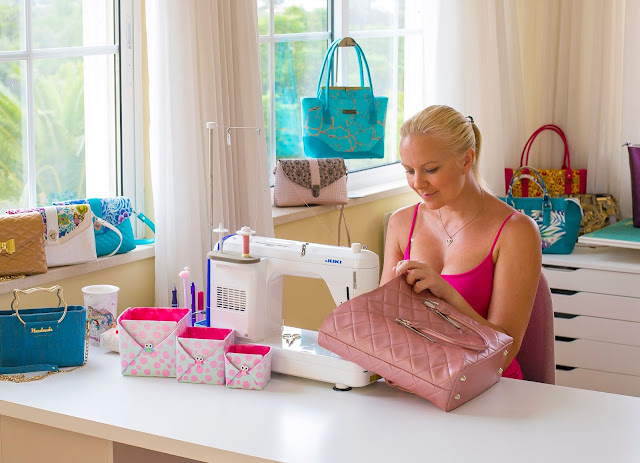