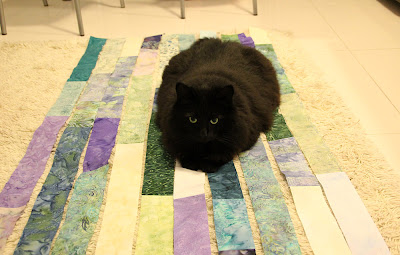 I just felt I had to show you what excellent company I have just this second as I've started playing with my Hoffman Bali Pop Grasshopper. It's a lovely combination of colors (the dark green don't stand out like that IRL, it's the night time photo that's to blame) and Diana obviously thought so too as she immediately settled on my finished strips as I'd laid them out =)

Earlier she's been "holding" the lower end of my measuring tape for me as I've measured my strips ^^ Such a helpful little lady my Diana.

This quilt is going to become my own version of a quilt I've seen both online (where I can't remember for the life of me right now) and then later on the quilting retreat. This one is made by the talented Anna at the retreat: 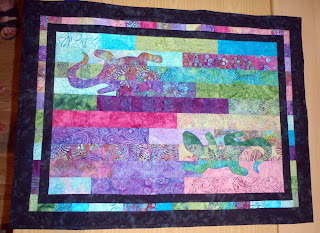 However, as the technique makes me think of chameleons rather then regular lizards, I think I'm going to make a play on that for my version ^^
Posted by Maria Wallin at 22:53